This Greywater Processor and the Kombucha Stand are two serious improvements.

Of note today: the Thunderdome-style greywater processing system the kitchen has installed so that it can do dishes and reuse the water after a lengthy natural filtration. A Queens man even set up a Kombucha stand, complete with taps crowning a bar fridge, promoting his small business: “Beyond Kombucha.” His mother had done the art for his banner. Everyone could have a little glass of either oolong or yerba mate Kombucha. (Yerba mate was tasty.) It was a promotion-donation, about which I’m ambivalent. 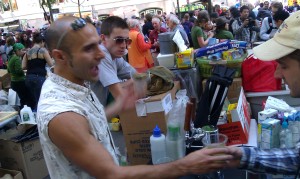 Don't get excited, it's not beer. But have some!

Some kind of order is emerging at OWS in fits and starts, but you can still spill water across the newspapers and flyers on your cardtable or go without a donations bucket for several minutes while the only one at that table is being emptied. Apparently that $100 one guy put in it while I stood by was over the top.

My coverage of Occupy Wall Street is winding down: No more yelling in my headline, and the posts won’t be as frequent or larded with photos and video. It’s not that I’ve stopped going—I’m still there most days. It’s because the world has finally run with the ball, indeed they’ve started playing the Occupy Game all over the globe. This has forced mainstream and alt-media alike to do their jobs at last (early adopters like Democracy Now! notwithstanding). So my crazyquilt anecdotal coverage is no longer necessary, and I can return to regularly scheduled programming, such as it is.