Actions at OWS: The Reformation 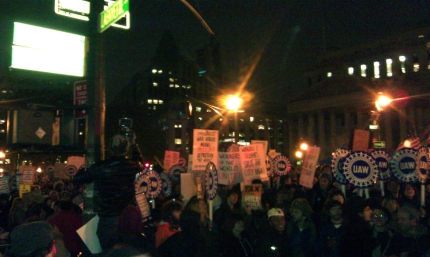 At Lafayette and Duane, the numbers insane.

The bruited about death of OWS was greatly exaggerated. I never doubted it though I haven’t returned in almost a month. Despite the destruction of 5,000 books and all the accoutrements of outdoor survival in Liberty Park (since Brookfield Properties requested the purge, never mind “Zuccotti,” let’s revert to its prior name), the movement has only grown stronger. Events of November 17 #N17 bore this out, with unconfirmed estimates of 10,000 people having manifested.

I stopped by Jamaica, Queens to see if an Occupation of the major commuter hub had taken place, as planned. Forty-five minutes after it was supposed to have started, there was nothing unusual in this swarming station. Continuing to Foley Square, at 1700 I found unprecedented legions of people clogging everything within 3 blocks of the square across from City Hall. Unions and citizens alike stood shoulder to shoulder, and flyering was such that I needed a satchel for it all. PA system was permitted, and in addition to the usual exhortations (even one from a child) highlights included a choral rendition of the First Article of Occupation by the Church of Stop Shopping Choir and some flow from various hip hop performers (but damned if I didn’t hear that one was Fab Five Freddy?!). Treatments of James Brown’s “The Payback” were appreciated, as was PE’s “Fight the Power,” but that only made me wonder why Chuck D had not represented at OWS. Fortunately I left as Tears for Fears inexplicably came over the PA: Everybody may want to rule the world, but OWS is not about leaders.

At some point while I was listening to the PA, people began to filter out from Foley Square. There was a crawling procession towards the bridge, which I joined with some friends who’d intermittently visited OWS over its 2 months. The street was solid with people for several blocks, and clusters periodically broke into different chants.

On the bridge, I noticed a big difference from the “Arresting of the 700” march over a month earlier. Traffic on both sides was riotous with support. Motorcyclists revved their engines, cars honked, fists jabbed from windows and moon roofs. It was almost too easy to cross, casually discussing whether the breakup of the camp had been a net gain for the movement. After all, the rout had ended the administrative chore of the encampment, the internecine bickering, the cyclopean effort required to make the movement’s practical face reflect its ideals in the face of repression, infiltration and simple incivility.

Someone had requisitioned a huge projector and pointed it at one of the skyscrapers overlooking the bridge, facing towards Brooklyn so it was behind the waves of marchers. “99%” it read in scorching white. When I looked again the stencil font read “We Are Winning.”