Horseradish—Edible Plant of the Year 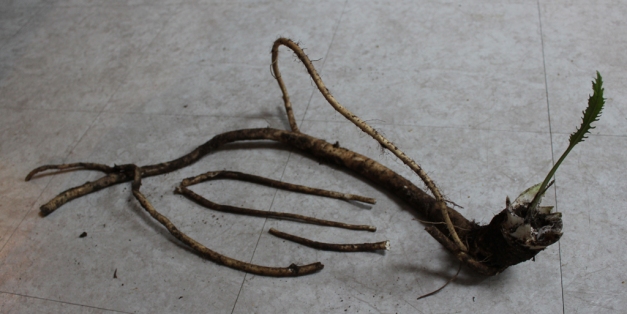 Just over two feet long. I should have left the runners in the ground; they become new plants and aren’t as tasty. Oh well, at least 4 more to go!

My five years of outdoor gardening have proven a crapshoot. Indoors, I ran a hydroponic sprouter big enough to provide at least 40% of my food, grew medicinal plants from the world over and raised habanero bushes 3’ tall and bearing 30-40 peppers per. I naively thought the same results could be obtained outside with the same effort.

Squirrels, shade from a centenarian oak, extreme rain, high nighttime temperatures, and countless other complications have made it difficult to get consistent results. There have been just enough surprises to keep me going.

I thought when I planted 3 horseradish plants in spring of 2011 that I would have some roots to experiment with, but when I harvested my first one I learned a lot that I could have read somewhere—but it wouldn’t have been as fun: 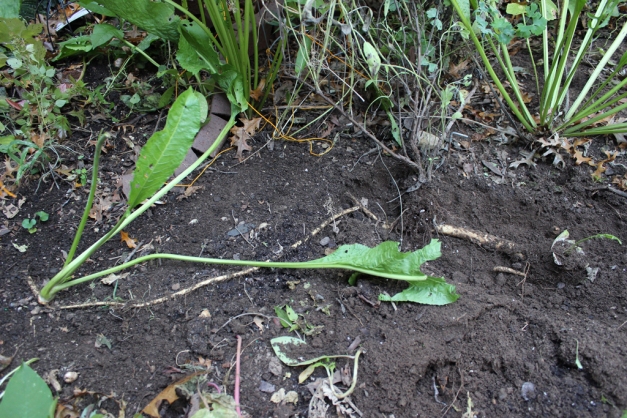 The major (right, one leaf), the minor (note that tiny root needs to grow), and the poor sage that got between them.

Not many plants reproduce themselves, have edible young and old leaves of totally different characters, and provide a root that can be eaten raw as a condiment, in cocktails or – though it seems a waste – cooked as a parsnip substitute. As I eat sauteed adult horseradish leaves with golden tofu and sprouted black lentils in black bean sauce, I’m grateful for both the bounty of nature and the networked information that saved my 4 meals’ worth of leaves from the compost heap. Sorry, worms.