It was a beautiful day in outer NYC today, so I was working in my victory garden. I had to plant a dozen lemon cucumbers bursting from their pots and ideally a rosebush that’s been pining on the porch, but since I practice “paranatural gardening” (not weeding until the land will be used), I never finish as much as I hope.

While clearing out a space for the cucumbers near the Malabar Spinach, I noticed that the tomatillos reseeded three plants. I also saw that the Egyptian Onion has transplanted its young within a 2’ radius, as it is wont to do. This onion produces cocktail onion-size bulbs in clusters at the ends of its 2-3’ hollow stalks, which become so heavy with bulbs that they collapse just as the bulbs are starting to sprout. 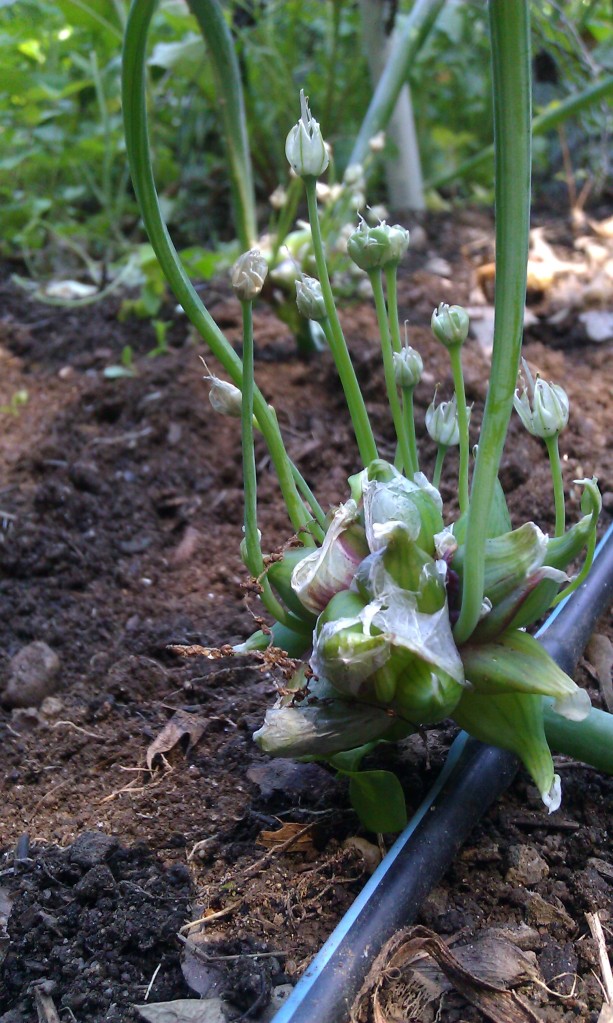 They bend to earth and wait to break.

I was thinking about Egypt’s revolution (notwithstanding the Supreme Court decision that’s condemned voters to choosing between the devil and the deep Red Sea) and the regional agitations for change in the Arab Spring. The Guardian has a sleek, effective graphical timeline presenting key events in the regional uprising through December 2011; recall that Egypt’s role came pretty early in the movement.

Sometime the bulb sprouts before it even falls: Yemen, where President Ben Ali fled before he could be sentenced. It may be knocked off and then sprout: Libya, where Qaddafi was killed in the country and his son was captured. Perhaps a bulb on the cluster falls off and seems to dry up: Syria, where 12,000 are dead and there seems to be no end in sight. Recalling the speeches, the protests, the camps in Tahrir Square, the images…maybe the zeitgeist had started with the Egyptian.

Or maybe I’d had too much sun.