Wait until PETV (People for the Ethical Treatment of Vegetation) gets a hold of me—I’m eating babies.

As I write this I am snacking on sprouted sunflower seeds, after a breakfast of sprouted oat groats & buckwheat. Later I’ll eat some sprouted chickpea raw hummus. I’ll admit it’s extreme, but I’m excited to be back.

Above is the first iteration of the sprouter, tapped into the bathtub spigot and hanging from an overhead sprinkler pipe in a Brooklyn loft. Water filter, air filter, timer and grow light orbit an underbed storage box ringed with piping and stainless/brass misting heads. Neighbors brought strangers by at all hours of the day and night to see the spectacle and hear the hiss of the heads punctuated by the whingey snore of the drainage tube. It was a dramatic solution to a grave problem. 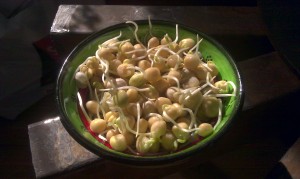 In those days, Bushwick at Morgan Ave. was a food desert. The only fresh grocery was run by a transplant from Seattle, as more of a public service than an efficient business (he later cashed out to a Korean crew). I knew I was nutrient deficient when in the dead of winter when I took a shot of wheatgrass and got a high that lasted 15 minutes. That’s when I began researching sprouters.

Val Archer could have a better website, but nevermind that; she designed a great sprouter. I reinstalled it last week, plumbing it with 1/4″ OD icemaker line from my coldwater line under the kitchen sink. With seeds from Sprout People, my diet is again full of microgreens like broccoli, turnip and watercress, augmented with varieties of lentil and pea.  Sprout People have an astounding selection of affordable, turnkey sprouting solutions, like the hempcloth sprouting bag which, at $10, will do most of the things I have growing here, and much simpler. Almost as valuable as the sprouts is the water: full of enzymes, minerals and vitamins, it’s like a growth factor for anything with roots.

In Bushwick I used sproutwater on 5 habanero pepper plants (raised from supermarket pepper seed) and all grew to over 3 feet, bearing ~40 peppers apiece in a window with southern exposure. A tiny subtropical plant produced 3 flowers almost as large as it was.  Now that I have an outdoor garden I’ll be able to use the ~5 gallons a week it produces, and I look forward to exciting results.